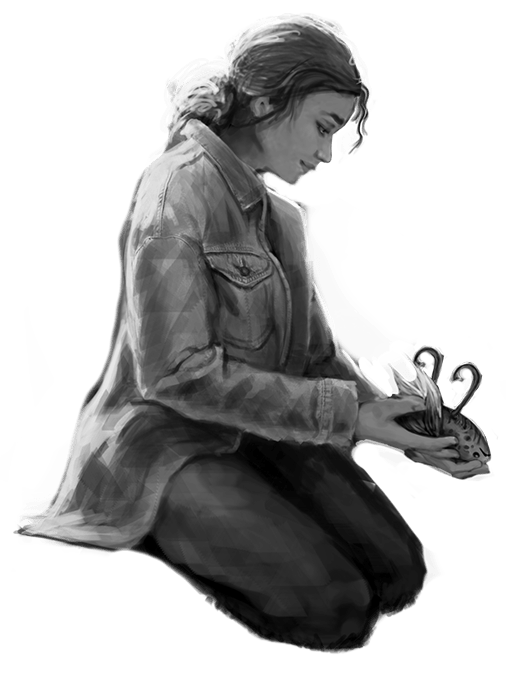 Kaiya (early 20s) – An only child for most of her life, raised by her single mother, Kaiya had a difficult time accepting her new stepfather (Ted) and stepbrother (Sawyer). As she slowly begins to let them in, Sawyer’s untimely death forces her to face her feelings and her past.

Mordo (ageless) – A gruesome, mute, corpse-like representation of Kaiya’s grief. A companion that shadows her throughout her journey.

Paka (unknown) – A peculiar forest dwelling creature first introduced to Kaiya through Sawyer, during a game of Dungeons & Dragons. Paka appears to Kaiya after Sawyer’s death, imploring her to help save his forest home from the “Evil Man.”

Kari (early 50s) – Kaiya’s loving mother. Life has not always been easy, but she has done her best to shelter Kaiya from those difficulties, perhaps to a fault.

Ted (mid 50s) – Kaiya’s stepfather, Sawyer’s father. He and Kaiya don’t always see eye-to-eye; a situation exacerbated by his son’s death. Though he has a hard time expressing his feelings, he truly does care for Kaiya and Kari.

Brian (mid 20s) – Though it was an accident, Brian’s involvement in Sawyer’s death makes him a villain in Kaiya’s eyes. She unwittingly pursues a fictionalized version of Brian, the “Evil Man,” until she finally sees his equally shared grief.